Looking for a good, feature packed antivirus software for macOS? Here is our review of Bitdefender Antivirus for Mac, its features, pros & cons all included.

With time, our computers have become more powerful and sophisticated. This goes double for computer viruses, which can now hold your important files for ransom (ransomware), send information about your keystrokes to third parties (keyloggers), and slow down your machine to a crawl (malware). Today’s viruses need to be put down before they even have a chance to wreak havoc on your digital life. In such a scenario, it is important that you choose an antivirus software that is smart, capable and made by a trusted name in computer security.

One trusted antivirus is Bitdefender, a Romanian cybersecurity firm that has built its name with innovative antivirus solutions since 2001. Its software has proven reliable in malware detection, with Bitdefender Antivirus for Mac providing top-notch security protection against a variety of threats. The software ensures that everyday users need not worry about their safety, while it safeguards against viruses that could slip in unwittingly without your knowledge.

One feature that Bitdefender offers to its users is that unlike some antivirus software in the market, it is rather light on system resources yet very effective at stopping threats as they happen. This is made possible with its passive system-scanning feature that uses a low-memory footprint. You won’t even know your precious Mac CPU cycles are being used, because Bitdefender works silently in the background, without impacting your daily workflow or gaming.

For Mac users who are curious to know more about how this antivirus solution stacks up, follow our review of Bitdefender antivirus for Mac. 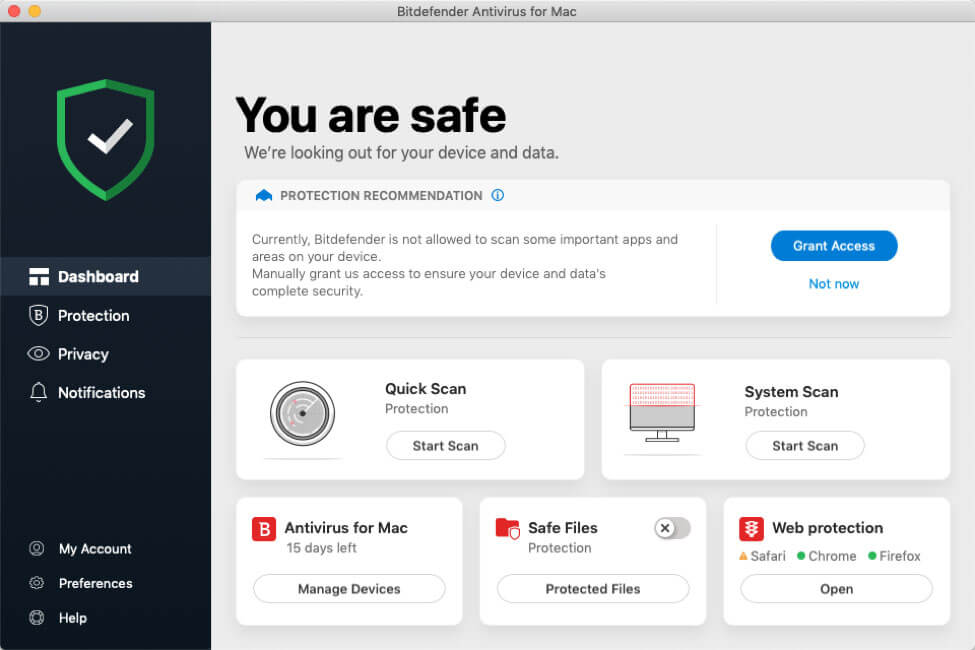 Let’s get this price issue out of the way. Bitdefender starts at $39.99 per year for one Mac, which is pretty standard fare(A free 30-day trial is available). Bitdefender also offers multiple-Mac/PC subscriptions, and there available Bitdefender Antivirus Free Edition for Windows.

For 3 Macs, its $59.99 a year. If you are looking for something longer term, Bitdefender has got options for that too.

Bitdefender for Macs runs on MacOS 10.10 Yosemite or later. You will need a minimum of 1 GB hard disk space to run it.

Bitdefinder Antivirus Review: How it works

Through its use of traditional signature-based detection methods, Bitdefender identify threats before they have a chance to cause havoc. In Macs, it accomplishes this by first unpacking Mac-specific file formats and then scan them for any malicious code.

And that’s not all. In order to defend against ever-evolving threats, Bitdefender uses an artificial intelligence system to train its software against next-gen threats. Instead of being reactive, this software eliminates threats by being proactive.

Even compressed files are handled perfectly by Bitdefender Antivirus for Mac. It scans ZIP files before they are even opened, checking for signs of any malware present inside them.

For round the clock protection, Bitdefender runs silently in the background while performing system-protection scans without interrupting you. We did say it has a low memory footprint, which is great because Bitdefender never gets in the way of your work or play. On-demand scans are also available if you need them. 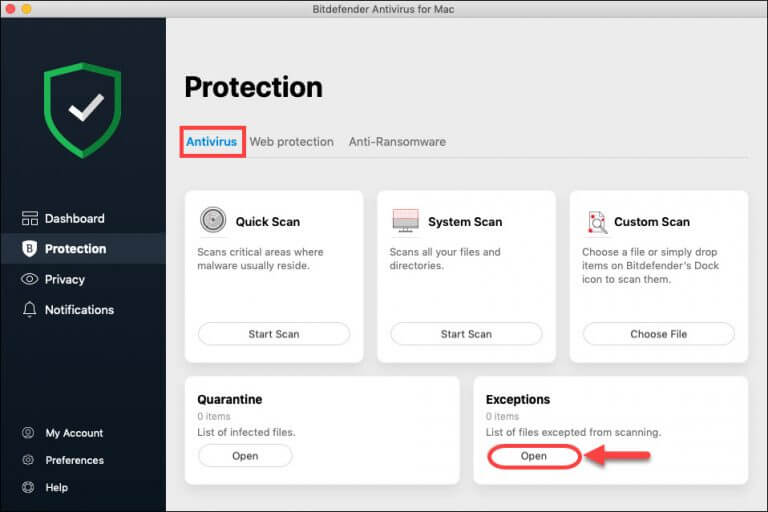 Should you require it, Bitdefender also has a neat and feature-rich app for Android devices.

Is Bitdefender for Macs a breeze to use? We will have to go with yes, it is. The app is designed beautifully, with access to the most important options laid out for novice and pro users in a presentable way.

At a glance, you get these options in Dashboard view:

The use of a soft and easy-on-the-eyes color scheme sits right at home with macOS users.

Bitdefender uses its artificial-intelligence system to learn and then apply lessons from their user base and train their software against new threats.

On the left-hand side, you can cycle through these tabs:

Rounding them off are settings for your Account, Preferences and Help.

Bitdefinder Antivirus Review: How to install

You will need to give security access to Bitdefender in system preferences. This is because macOS requires users to allow apps that need high-level access rights for performing system activities.

The installation takes 2 minutes and doesn’t require a restart. You will see a Bitdefender VPN icon in your menu bar as well. It is annoying, but the good thing is that you can remove it from settings.

When it comes to their track record, Bitdefender for Mac has scored perfectly in protecting your macOS machines. The Austrian AV-Comparatives independent testing lab conducted a battery of malware tests to gauge Bitdefender’s readiness, and it scored 100% in July 2019. Scores were similar with other virus testing labs such as AV-Test in April and May 2019.

How good is it with user privacy and security?

Did you know that Bitdefender Mac comes with a neat little VPN client software? It allows you anonymous and unrestricted access to websites and online services. You get 200MB per day for VPN-related usage for free. If you are looking for an unlimited option, consider checking out Bitdefender’s Premium VPN service which costs an additional $40 annually. The premium package gives you more flexibility as well as unlimited data, allowing you to fine-tune your location to any specific one as you need. For example, you can set your VPN to USA, which in turn will make you browse USA-based versions of popular websites. Consider your privacy safeguarded. This also ensures that websites won’t be able to track your habits.

Apart from VPN support, Bitdefender for Mac also offers the Traffic Light browser extension. If you use search engines like Google and Bing a lot, this extension is a godsend. It basically shows users which sites are safe to visit from your search results, with a helpful green light icon indicating secure sites. You can download it for free right now for Firefox, Safari and Chrome.

Bitdefender scans ZIP files before they are even opened, checking for signs of any malware present inside them. 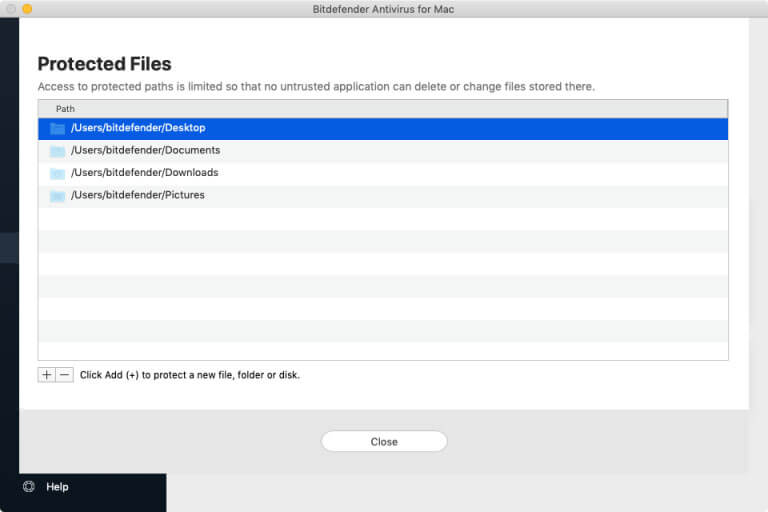 Last but not the least, your very important files and folders can be secured against ransomware attacks with Safe Files protection feature. It comes with default with Bitdefender, offering you complete ease of mind for safeguarding mission-critical files. Safe Files works by allocating a folder as a ransomware-free zone, allowing no rogue app to encrypt those folders. If you use Time Machine backups, you will be pleased to know Safe Files keeps ransomware off those backups too.

When it comes to passive scans, many tests reveal that Bitdefender has little to no significant hit on a computer’s resources. Consider the VLOOKUP test where Bitdefender’s passive hit is 0%, which is impressive when you compare it with other antivirus products such as Avast and Norton (less than 1%) to Sophos (5%). For Mac users, this is as good as it gets. You can carry out your work without being affected by pesky and random slowdowns.

Active scans however, will take up a fraction of your system resources. Given its in-depth and exhaustive scanning process while initiating an active scan, tests show that a full-system can result in a performance dip of 23%. It may look huge, but compared to the competition like McAfee (47%) it is better. However, antivirus solutions like Sophos have the edge with just a 7% dip in system performance.

One drawback to using Bitdefender becomes evident as soon as you use its Quick Scan feature. The VLOOKUP test results in a performance hit of 34%. Comparatively, Norton scored 16% and Sophos 10% with their Quick Scans. Kaspersky seems to be the worst offender here, with a performance dip of 53%.

As for full system scan on a test Mac, Bitdefender took 4 minutes and 25 seconds to scan it. Amazingly, Malwarebytes took a short 16 seconds scan on the same machine. Worst offenders include Sophos (2 hours and 56 minutes), while Kaspersky (41 mins) and Norton (25 mins) were also bad.

For paying customers, Bitdefender provides 24/7 technical support in the US, UK, Canada, New Zealand, Australia and Romania. Other regions like Brazil, Japan, Italy can also take advantage of tech support.

However, to actually get access to tech support, you need to visit their portal here. This link isn’t made obvious in the app itself, though it could have been nice to include it for first time users. Once you navigate here, you can call, email, chat or post about an issue in their forums.

You get 200MB per day for VPN-related usage for free. If you are looking for an unlimited option, consider checking out Bitdefender’s Premium VPN service which costs an additional $40 annually.

All in one package with great, if not the best, security and antivirus features for Mac users. Bitdefender is already part of Editor’s Choice with many tech publications.

To sum it up, let us take a look at what works and what doesn’t with Bitdefender.

With Bitdefender for Mac, it just works. Thanks to its flawless malware detection capabilities and low memory footprint as it works in the background, this antivirus suite comes highly recommended.

We would have liked more control over Bitdefender making its VPN client an optional install, and that is something the company should keep in mind for serious users. Tech support is also a mixed bag with phone support not that easier to find. Barring these few caveats, Bitdefender for Mac is highly recommended.

You must remember though that an anti-virus can only do as much in protecting your system. You must be wary of odd emails, of spammy websites and downloadable links. Before you run any .exe file, make sure it is scanned in the Bitdefender anti-virus to ensure there is no hidden malware or trojan attached. Similarly, all downloaded files must also run through the software. You must also avoid download music or video files from regular public websites. Although the iOS itself has a strong security feature, you could inadvertently infect your system when you do not practice basic online safety guidelines. 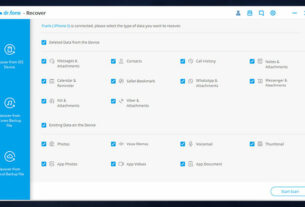 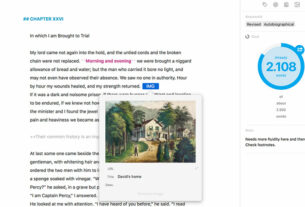 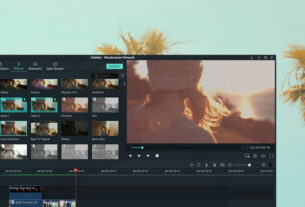 Filmora Video Editor Review 2020: Is It Good and Worth the Money?

3 thoughts on “Bitdefender Antivirus for Mac Review: The Best Antivirus Bar None”